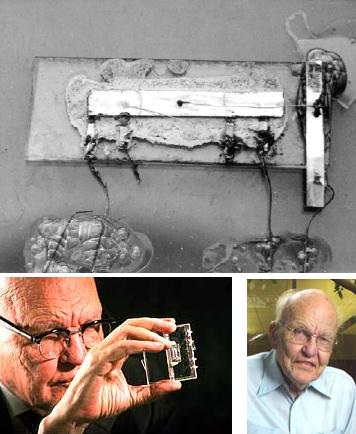 1958: Invention of the Integrated Circuit
Texas Instruments’ first IC
As with many inventions, two people had the idea for an integrated circuit at almost the same time. Transistors had become commonplace in everything from radios to phones to computers, and now manufacturers wanted something even better. Sure, transistors were smaller than vacuum tubes, but for some of the newest electronics, they weren’t small enough.

But there was a limit on how small you could make each transistor, since after it was made it had to be connected to wires and other electronics. The transistors were already at the limit of what steady hands and tiny tweezers could handle. So, scientists wanted to make a whole circuit — the transistors, the wires, everything else they needed — in a single blow. If they could create a miniature circuit in just one step, all the parts could be made much smaller.

One day in late July, Jack Kilby was sitting alone at Texas Instruments. He had been hired only a couple of months earlier and so he wasn’t able to take vacation time when practically everyone else did. The halls were deserted, and he had lots of time to think. It suddenly occurred to him that all parts of a circuit, not just the transistor, could be made out of silicon. At the time, nobody was making capacitors or resistors out of semiconductors. If it could be done then the entire circuit could be built out of a single crystal — making it smaller and much easier to produce. Kilby’s boss liked the idea, and told him to get to work. By September 12, Kilby had built a working model, and on February 6, Texas Instruments filed a patent. Their first «Solid Circuit» the size of a pencil point, was shown off for the first time in March.

But over in California, another man had similar ideas. In January of 1959, Robert Noyce was working at the small Fairchild Semiconductor startup company. He also realized a whole circuit could be made on a single chip. While Kilby had hammered out the details of making individual components, Noyce thought of a much better way to connect the parts. That spring, Fairchild began a push to build what they called «unitary circuits» and they also applied for a patent on the idea. Knowing that TI had already filed a patent on something similar, Fairchild wrote out a highly detailed application, hoping that it wouldn’t infringe on TI ‘s similar device.

All that detail paid off. On April 25, 1961, the patent office awarded the first patent for an integrated circuit to Robert Noyce while Kilby’s application was still being analyzed. Today, both men are acknowledged as having independently conceived of the idea.